We stayed over night at the village in the Palestinians homes, trying to protect them the best we could.

Can you image knowing that at any time hundreds of settlers armed with machine guns could come rampaging towards the houses  It is truly terrifying, for us though we are only there for a short time but for the Palestinians who live there this is everyday life.
We left the village the next morning, as in my last e mail and headed back towards Nablus for some well earned sleep.  We only had one hours sleep in the last 48 hours due to the settlers and army constant harassment.
We had not even opened the door of our flat when we received an urgent phone call to return immediately to the village as the Army were invading peoples houses and the settlers were trying to expand their settlement.
It is even harder here because it is Ramaddan and of course we observe this when we are with the Palestinian people.
So we immediately had to head back to the village to find the village was under curfew and also talk of a Closed Military Zone.  This means we are not allowed to enter and could be arrested for entering.
Then again we could have been in the village when they imposed the curfew, how do they prove we had left?  That was the plan for us anyway.
We came near the entrance of the village to find soldiers guarding the entrance.  Well all I can say is if they had half a brain they would realise there is only way in and that is to climb over the mountains and go around them.  So of course that is what we done and managed to get in. 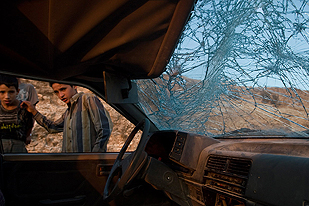 We arrived at the village to find the army blocking off the roads with their army vans and trucks.  It is strange to think how it no longer bothers us to walk towards Army with guns pointed straight at us and telling us to stop.  Of course we ignore them ( we do not take orders of Israeli soldiers ) and walked by them.  When you think about it, how do they know we speak English?
Another strange had joined us thinking we knew how to get in and he did stop for the Army and was arrested.
So we continued up the hill towards the house we had been sleeping in to protect and found another Army Jeep outside.  He actually tried to push us back but again we managed to barge through.  The Glaswegian accent comes in very, very handy at times like this.  When he shouts STOP, STOP we answer whit man, cannae understand yi.  Whit you saying son.  You are a wee minger aint you.   It worked anyway and we got to our family.
Again 2 minutes later the settlers came rampaging towards us again, of the joys of being an activist in Palestine.
The settlers are crazy yes, but if you could have seen the reception when we entered the village from the Palestinians it was embarassing, there were cheers and claps and thank you for coming everyone shouted.  For what we asked?   Nobody should have to live like this and hope that strangers will come along to try and protect them.
Well the settlers never actually made it to the village and returned back up the hill.  This is everyday life in Palestine so towards the early evening we left when the family said they were okay for us to go.  We are as a group Palestinian led and do what the Palestinians ask us.  We left our phone numbers and told them we were only a phone call away.
We headed towards Huwarra checkpoint again, Nablus only to find 2 young men detained in the cell.  We spoke to the soldiers who told us Nablus was the TERRORIST CITY OF THE WORLD.  He also told us the University in Nablus was a front for making bombs.  We tried not to fall about laughing but did tell him that Nablus was one of the places we felt most at home.
It is hard for us to remember this is when we must act as stupid tourists and claim surprise at what they tell you about the Palestinians.  It is hard doing checkpoint watch because if you are aggressive to the soldiers there they can make the Palestinians life harder, but by being rather stupid and touristy you can tell them that ‘ go on, prove you are a nice guy and let the 2 men go’.   It is extremely hard to do this, because of the work we do here but it does benefit the Palestinians.
So we did eventually get the 2 men released, without us they would have been in the cell with their hands tied behind their backs for a further 2 and a half hours.  So he was not too late for to break fast.  (That is when the muslims can eat after fasting all day ).
We have been told of further settler violence at Yanoun and are planning to go tomorrow, and the Nillin Demo Wednesday.
The Army have now also put in private security at Nillin and the last few demos they have been firing live ammo.
If I could only find a way to give everyone a piece of the Palestinians hospitality here I would.  Their love and generosity exceeds anything I have ever seen before.
I met with Jonatan from the Israeli Anarchists at the village and made the private donation and also met with Medical Relief here in Nablus who are delighted at the medical aid we have gave them.
Only problem now is they are trying to make me promise I will work with them and not ISM the next time I come.
Caroline and Brenda maybe you fancy working with them when you come?
To everyone in the Campaign and the people who support us THANK YOU, THANK YOU FROM THE BOTTOM OF MY HEART AND ALSO THE STUDENTS WE FUND, THE CHILDRENS GROUPS, THE MEDICAL NEEDS WE HELP FUND AND EVEN THE SMALL THING LIKE THE BREAKING OF THE PALESTINIANS WINDOW AT NILLIN WHEN THE IOF FIRED A TEAR GAS CANISTER THROUGH IT, AND WE PAID FOR THE WINDOW TO BE REPLACED