It’s gone midnight on the pretty tiled terrace of the Al-Kurd’s home in the Sheik Jarrah neighbourhood of East Jerusalem. A colleague and I from Glasgow Palestine Human Rights Campaign are bedding down, taking a turn, alongside a couple of other international activists, to form a watchful defence of the family’s house. These dedicated volunteers, from all around the world, are part of a prolonged campaign to stop an Israeli takeover of this and 27 associated dwellings, the Al-Kurd’s home being a critical test case of whether they succeed. 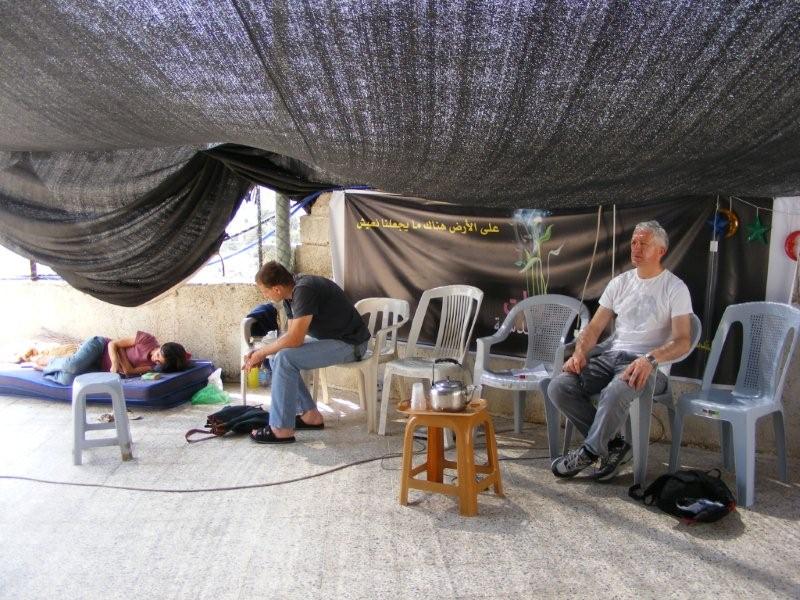 Around the terrace walls hang wonderful art banners, proclaiming “This is apartheid”, “We will NEVER leave” and other messages of determined resistance. It’s an admirable statement of political and personal resolve, indicating just how much is at stake here.more pics

Mohammad and Fawzieh Al-Kurd have lived in their home since 1956, raising five children, and consider it their rightful habitat. Now the family are threatened with eviction, part of a systematic attempt to remove Palestinians from key parts of East Jerusalem. Mohammad has partial paralysis, diabetes and a heart condition. It’s an intolerable stress for this quiet, dignified man and his caring wife.

The 28 units were originally funded and built by the Jordanian government, in conjunction with the United Nations Relief and Works Agency (UNWRA), to assist Palestinian families fleeing their homes after the 1948 Nakba. In 1967, from the fallout of the Six Day War, two Israeli property companies used forged documents to claim legal ownership of the homes, securing their demands through the Israeli Land Register before issuing a suit against the families in 1982. Without proper consultation, the lawyer appointed by the families reached a settlement with the settler associations, accepting their ‘ownership’ of the land in return for “protected status”, a limited form of tenure. The families duly sacked the lawyer and, in an act of principled refusal, withheld rent from the illegitimate settler owners, thus allowing them a pretext for eviction orders against the families.

Following further litigation, the families’ current lawyer was partially successful in challenging the settlers’ claims, resulting in a 2006 decision from the land registry that the settlers’ land rights be revoked. However, they have not, as yet, agreed to the families’ demand for a formal rezoning of the area to establish, in perpetuity, rightful ownership.

This refusal appears to be a politically-based manoeuvre to strip Palestinians of their land rights, part of the de facto ‘transfer’ agenda Israel is operating in East Jerusalem. The families have, in turn, petitioned the Israeli Supreme Court requesting the rezoning process, the annulling of all documents relating to the settlers’ land rights and cancellation of the eviction order against the Al-Kurds. The Sheik Jarrah neighbourhood committee also complain that the court decision to evict the Al-Kurd family was based solely on the 1982 case involving the compromised lawyer’s ‘agreement’, deliberately neglecting the many new legal arguments brought in favour of the families.

Meanwhile, the original settler groups have sold-on their claims to a settler property company which, in turn, has submitted an application to demolish the 28 homes and build 200 units for new Jewish immigrants.

Adding to the stressful burden of the Al-Kurds, a group of settlers broke into an annexe of the family’s home in 2001, while the family were in Jordan, taking-up illegal possession. Despite a 2007 eviction order from the Supreme Court, the settlers remain in the building, the removal instruction yet to be implemented. In stark contrast, two Palestinians from the other 27 houses have been jailed for their legitimate resistance. The Al-Kurds have lived with constant settler surveillance around their home, verbal threats, bribes and actual invasion of settlers into their house. The settler families arrive and stay on a rotational basis, making it even more difficult to secure their removal through the courts.

Such are the intimidating practices going on around this and other East Jerusalem neighbourhoods. The attempted removal of the Al-Kurds and the other 27 families is part of racially-driven project to establish yet another Jewish settlement in an area critical to any final status resolution of the overall conflict. The Sheik Jarrah committee are also scathing about the inaction of the Jordanian government and UNWRA in failing to fulfil their legal and humanitarian obligations towards the families.

Occupation is a crime

Over the next few days and nights, our GPHRC people spend more time outside the house, observing, talking about the issues and receiving the kind hospitality of this heroic family. Mrs Al-Kurd’s quiet, resilient manner and caring smiles seem, in particular, so symbolic of the Palestinian people’s capacity for rightful resistance. We’re all greatly touched by her fortitude and generosity.

nation. Besides the legal injustice in this case, he sees Israeli encroachment of the land as a negation of basic social tolerance. He reflects fondly on his pre-1948 schooldays in East Jerusalem, shared harmoniously with Jewish, Muslim, Christian and other diverse pupils.
The breakdown, he laments, intensified after ’67, as Jewish claims to East Jerusalem land became coupled with spurious invocations of holy sites. Thus, a once anonymous cave linked to Simon the Just – at the short slope fronting the Sheik Jarrah homes – was increasingly heralded by settler Jews as sacred ground, providing a pretext for the takeover of nearby Palestinian dwellings. This religio-cultural posture is a familiar tactic of Israeli land grabs.

The Sheik Jarrah Committee have gained the support of many international observers and politicians. Among them is US Consulate Kyler Kronmiller, who has made numerous representations to the Israel government on the families’ behalf. The Sheik Jarrah Committee have also secured pledges of support from prominent European Union officials. It’s a telling indication of Israel’s excessive apartheid policies. Not even unwavering US/European support for Israel, it seems, can disguise the fundamental illegality of Israeli actions.

Yet, Israel’s territorial belligerence continues, indifferent, as ever, to external, and, of course, Palestinian, objections. This territorial mindset is physically evident outside the very door of the Al-Kurds home as, on cue, every 20 minutes or so, a rotating settler from the house across the Al-Kurds wall enters to ‘patrol’ the terrace. He knows, of course, that there’s nothing to patrol. But that’s not the point of this menacing exercise. The 2-way radio, paramilitary instruments and flashlight ‘checks’ on the area around the settler-seized door, right next to that of the Al-Kurds, is an intimidating routine, intended to reinforce the message of a ‘superior’ unmoving presence.

Some of the young internationals have given ‘him’ the generic title “Dave”, quietly sending-up his comic inspections. But they are also prepared for passive action, ready to defend the Al-Kurds door, utilising, if necessary, the thick metal chain and handcuffs already locked-on to the Al-Kurds’ window bars. During our night ‘shift’, an apparently ‘new Dave’ stopped to inspect the multiple banners and wall-mounted media cuttings of the case, exchanging words in Hebrew with his gun-wielding settler friend on the roof of the house overlooking the Al-Kurds.

Occasionally, the settler family allow their four young children out onto the patio. While the parents walk blithely past the internationals, the Al-Kurds and their many visiting family and friends, the kids look on, seemingly bewildered by the situation. They appear, on the surface, rather disturbed, unaware of how to regard the smiles we show them. They are just children. Yet, children being raised to regard hate and hostility towards Palestinians as, somehow, natural. What, one wonders, resides in the minds of their parents and the Zionist agencies behind this cruel, racist exercise. We also hear reports of noisy parties from the settler house, the police refusing to respond – unlike the punitive action reserved for any Palestinian, however paltry the offence.

With more critical court decisions pending, the Al-Kurd family try to sleep at night knowing that they may soon be removed from their home. Hopefully, they feel reassured by the continued presence of activists and supporters. Theirs is but one demoralising experience among Israel’s multifaceted repressions: in Gaza, a medieval siege; in the West Bank, checkpoints and refugee containments; in East Jerusalem, municipal and legally-disguised ethnic cleansing, part of the government’s calculated expansion of the 250,000 Jews living illegally in this part of the city.

As the many demolished Palestinian houses and grand replacement settlements around East Jerusalem show, Israel’s apartheid project here is all-consuming, doggedly resistant even to international condemnation. The plight of the Al-Kurds and their fellow residents means nothing to a state driven by greed and zero-sum expansion. But the resilience of the families and show of solidarity in Sheik Jarrah also demonstrates an enduring resistance to such racist oppression.