The Palestinian residents of Tel Rumeida never experience the living of a normal day. The nearly three years of curfew they endured during this intifada permanently scar the lives of every resident and the community itself. The five soldier stations and recently modernized electronic checkpoint currently located on three streets make it nearly 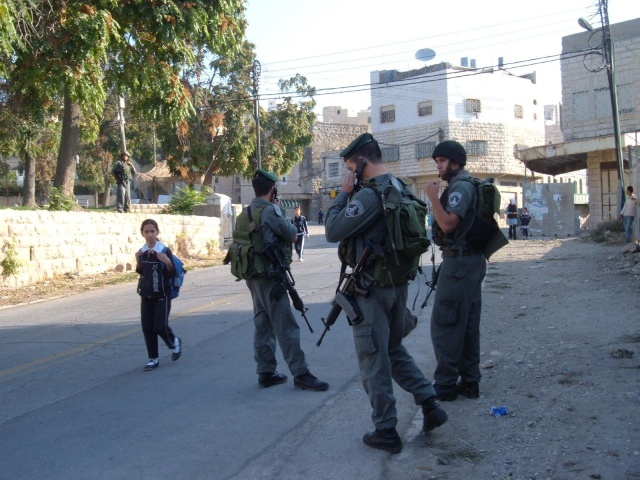 impossible for residents to walk anywhere unhindered. The two settlements, Beit Haddasseh and the Tel Rumeida settlement, housing some of the West Bank’s most extreme settlers (including members of Kach, designated by Israel as a terrorist organization,) and located at the top and bottom of the Tel Rumeida neighborhood, ensure that Palestinians living here will, at the very least, have a daily reminder that they are no longer welcome in their own neighborhood. The endless abandoned homes and forcibly-closed stores, many of them sprayed with violently racist settler graffiti, do their own part in contributing to the solemnly eerie atmosphere of the neighborhood.

The living conditions in Tel Rumeida are that of apartheid. Palestinians are not allowed to drive their vehicles on the streets; they are for Israelis only. Palestinian residents must carry or cart everything to their homes while settlers take joyrides through the neighborhood. Palestinians are forced to take winding, dangerous, secondary paths to reach their houses while Israeli settlers use the primary paths. Though the Palestinian residents do not participate in the violence which is so unceasingly apparent in the neighborhood, it is they who are stopped by the Israeli soldiers and forced to lift their shirts and open their purses. Though it is mainly the settler children, immune by law from prosecution, who terrorize Palestinian children and adults and who attack soldiers, it is the Palestinian children who are constantly stopped, who have their schoolbags searched, who are yelled at and hit by soldiers. It is Palestinians who must wait in lines to enter the electronic checkpoint every time they enter or leave their community. It is Palestinians who are harassed and humiliated by nearly every conceivable variety of Israeli law enforcement official as are in existence.

Israeli settlers rule Tel Rumeida. Young settler boys saunter through the Tel Rumeida streets stoning or attacking homes and Palestinian residents at will under the indifferent eyes of Israeli soldiers and police. Damaged and destroyed Palestinian homes, gardens, water pipes, phone lines, and windows live as a testament to the wrath of the settlers’ former deeds. The absolute impunity with which these settlers operate, combined with their overt camaraderie with the Israeli soldiers and policemen, are nothing less than a palpable message to the Palestinian residents of the neighborhood that their safety is not an Israeli concern.

Nearly every Palestinian resident of Tel Rumeida has a disturbingly devastating story, such as that of a young pregnant mother who has had two miscarriages in as many years as a direct result of Israeli violence. Last year, she was two months pregnant and, after Israeli soldiers came inside her home and fired their weapons, was found lying on the floor of her home, 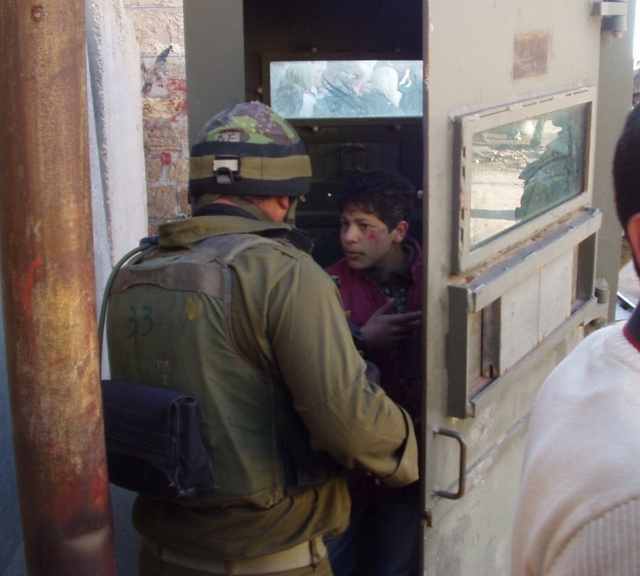 bleeding, and later lost her child. This year, only a month ago, pregnant with twins and home alone, her house was attacked by seven armed settlers screaming death threats. Soldiers stationed less than 30 meters from her home did not respond to her calls for help during the 20 minute attack. Two hours later, lying again on the floor of her home, she lost her first twin. Later in a hospital operation, she lost the second. Since the death of her twins, she has suffered from nervous attacks and has been repeatedly hospitalized for collapsing.

The children of Tel Rumeida, though they are many, almost never play outside. Those who do venture out run off the streets at the first sound of an approaching settler vehicle and run into their homes when groups of settlers walk by. Even the youngest child of Tel Rumeida has learned indelible lessons about the type of people their Israeli settler neighbors are and their own place in the neighborhood, acting out these lessons on a daily basis.