Arna’s Children is a 2004 Dutch-Israeli documentary film directed by Juliano Mer Khamis and Danniel Danniel about a children’s theater group in Jenin in the Palestinian territories established by Arna Mer-Khamis, the director’s mother, an Israeli Jewish political and human rights activist.

Three of the theater children died in various operations or while resisting the Israeli army, namely Ala, Nidal, and Ashraf. Yussef committed a suicide attack in Hadera in 2001, murdering four civilians. Two other children, Daud and Zakaria were imprisoned. 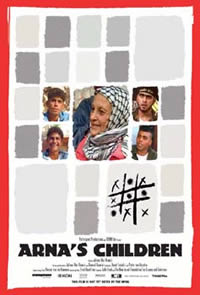 ‘The sun doesn’t shine in the camp’ is a 35 minute documentary on life in Balata Refugee Camp, Occupied Palestine. Filmed by international activists and Palestinians between December 2003 and March 2004, the film represents the suffering and struggle of the Palestinian people.

Composed of interviews with Balata residents and footage from the 2003-2004 New Year’s invasion, the film offers a unique view of Balata Refugee Camp.

During this invasion, 5 people were killed, 2 homes were demolished and dozens were injured. The 30,000 residents were held under 24-hour home imprisonment for the four-week period without access to food, medical services or supplies. Yet the residents of the camp continued to resist by breaking curfew, throwing stones, walking past tanks to attend school. Raw street footage shows the conditions people were forced to live under and their acts of resistance.

The soundtrack includes haunting but beautiful songs sung by children in Balata Camp. Some of these are available on this website.

‘The sun doesn’t shine in the camp’ 35mins

This movie is part of the collection: Community Video